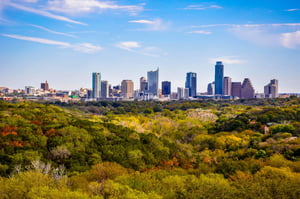 May demand of 7,960 units one of highest totals in decades

An unexpected surge in May apartment leasing in North Texas has caused vacancies to fall.

“That demand total drastically surpasses the performance seen in any other single month since this economic cycle began in early 2010,” said Greg Willett, chief economist with Richardson-based RealPage. “The previous high was about 4,200 units in March 2014.”

Dallas-Fort Worth apartment leasing was so strong in May that RealPage took special note of the activity.

“We don’t normally push out the monthly apartment stats, as there’s rarely a storyline shift from the quarterly performance,” Willett said. “But I thought it would be good to go ahead and share the stunning demand result for the month of May.”

Most of May’s net apartment leasing was in the Dallas area — 6,524 units compared with 1,436 in Fort Worth, RealTrends reports.

The jump in apartment leasing pushed overall vacancy rates below 5% in D-FW.

“While rent growth isn’t spectacular, it is solid around the 3% mark year-over-year,” Willett said. “Fort Worth’s figure is 3.1%. The Dallas performance, which had slowed to 1.4% as of the middle of last year, is back up to 2.8%.”

Apartment developers will no doubt be encouraged by May’s strong apartment demand.

More than 35,000 apartments are under construction in the D-FW area, the most of any U.S. metro area.

Along with the big increase in apartment leasing, home sales in North Texas rose 6 percent from last year — the strongest such performance so far in 2019. Home prices in the area were up 3 percent in May from a year earlier to a record median price of $275,000, according to data from local real estate agents.