In the global economy, the US dollar has remained a currency of immense importance and preserver of value. In fact, today, over half of all trade and global currency reserves are in dollars, making it more apt to say that the dollar is the global currency. To understand why the dollar is so powerful, we examined a few of its key features, which provide compelling evidence for why diversification in dollars could increase the potential of your portfolio.

The dollar clearly dominates all foreign exchange reserves. In Q1 2018, the dollar made up $6.5 trillion of global allocations, an estimated 62%. Though the Euro has also historically been a currency of great strength, it is still a poor competitor as a reserve currency. In the last year, the Euro contributed to roughly 20% of global reserves, accounting for a whopping 40% difference between its North American neighbour. As illustrated in the table below, other currencies of global acclaim, such as the Chinese yuan, and the Japanese Yen, do not even surpass the double-digit mark.

Source: International Monetary Fund Database (All figures are in US$ Bn)

As a result of the unwind in quantitative easing (QE), US Treasuries, held by the US Federal Reserve, have shown a sharp downturn. Despite this, however, US Treasuries held by foreign central bank accounts have steadily increased, continuing to make the dollar an attractive currency. Added to this is the fact that US Treasury rates have continued to surge, distorting risk-free rates worldwide and further pushing the dollar in a bear market. On a separate, but equally interesting note, the spike in US Treasury holdings by global central banks coincides with a surge in US Treasury yields. This implies that any surge in US Treasury yields owing to hike in US interest rates may attract even more inflows into the US, keeping dollar sentiments strong.

Source: US Federal Reserve Data updated as on 23rd August 2018

The strength of the dollar is further evidenced by the USD index, which measures the dollar’s relative value compared to a basket of foreign currencies. These foreign currencies typically belong to those countries that act as major trading partners for the US. As illustrated below, the index, which is a good marker of the dollar’s value, has gone through periods of decline in the last decade. On the whole, however, these weaknesses have only been temporary in nature. Instead, the dollar has remained strong, recouping most of the 'lows' suffered during a period of decline. 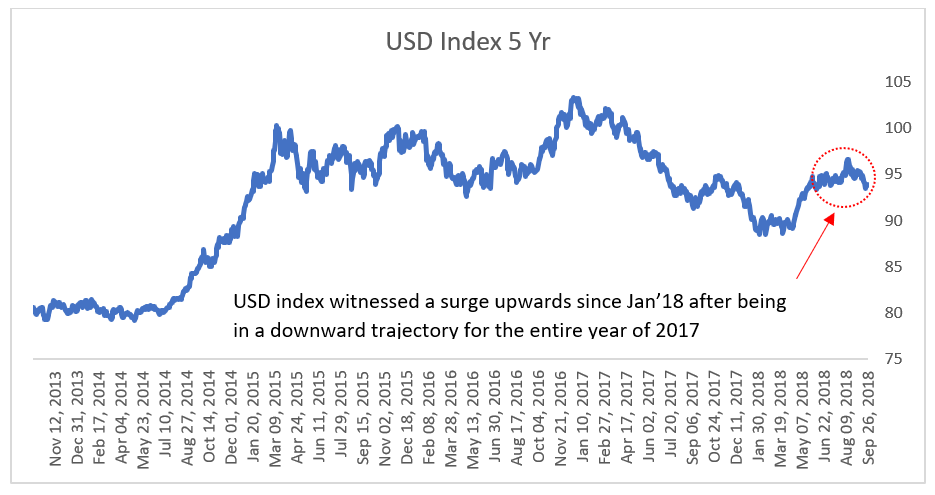 The continued might of the dollar gives strong grounds to consider diversification, especially if one’s investment portfolio is allocated in a non-dollar currency. Indians, especially, must weigh the importance of this due to recent volatility in the rupee. The rupee, which has depreciated to a record low against the dollar, has had a deleterious impact on inflation as well as small and medium chain enterprises.

For individuals that have been burdened by rupee volatility, a dollar investment could provide increased stability. In general, dollar investments made in non-cyclical asset classes can help to protect one’s wealth even more, as they are less influenced by movements in the economy. These sectors can hedge certain markets, like equities, and provide extremely strong returns in the world’s most powerful currency.